See here for a background of the problem I was trying to solve.

Orzeszek Ratings is the only tool out there to move your ratings and play counts between iTunes and Windows Media Player (on the same Windows OS computer).  I did encounter a limitation, which was that if a song was played in iTunes, and a different song was played in WMP, Orzeszek Ratings would only permit you to sync in one direction, meaning that metadata would be lost in the opposite direction.  I made a few changes to facilitate a two way sync, and the logic is the following:
Version 1.3 beta (can be downloaded from here) will inspect each song one by one, determining which metadata is the authoritative source by looking at which has the higher play count, and will sync play count, the rating, and the last played date (if applicable) to the non-authoritative source.  IMPORTANT: bidirectional sync will probably not work for you if you've been rating music on one player, but listening to it on another.  Do a unidirectional sync first to bring your ratings over to the other player. 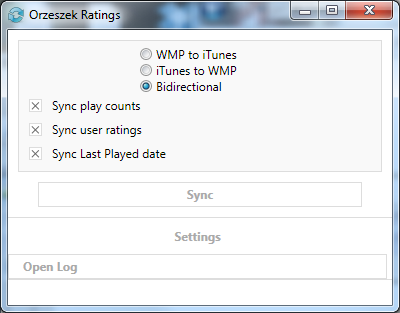 
Limitations:
The sync does not touch your files - it only manipulates the respective Music Management System databases, but there is always a risk that it could corrupt what's already there (especially if the process is interrupted somehow by something like your OS crashing).  I strongly recommend you back up the MMS databases prior to your initial sync.  Of course, once your sync has happened, one MMS will effectively be a backup of the other.  All the standard disclaimers apply, and specifically I make no guarantees on the safety of this tool on your system. I've only tested it on a single machine -- mine -- and there is always a chance that you may have that one machine where it fails. That said, I've been running the sync weekly for the last months, and it's been stable for me.  The source code is available in case you wish to scrutinize it.

If you have any feedback on this version, post it in the comments below.
Posted by Tim at 11:45 PM